Many Namibians may think of Karibib as a quiet town, but it once played a central role in one of the most devastating famines ever to strike the country. In the months immediately after the harvest of 1913, Ondjala yawekomba, (''the famine that swept''), began to make itself felt upon the inhabitants of the Owambo kingdoms in northern Namibia  and southern  Angola. The rains necessary for the planting seasons stayed away and the harvests of 1914 and 1915 turned out to be complete failures. By 1914 hunger was prevalent throughout much of the area, and by famine was widespread throughout all of Owamboland.
At the same time that this famine was making itself felt, a Portuguese expeditionary force of some
10 000 men, sought to enter northern Owamboland and force the Kwanyama kingdom of Mandume into submission. After a series of minor battles and skirmishes, that forced thousands of people to flee southwards, the Portuguese  army attacked Mandume and his soldiers near Ondjiva. In a battle that began at 7 o'clock in the morning and lasted all day, the Portuguese pounded the Kwanyama forces, until they finally broke and retreated  southwards. Masses of people, fleeing the horrors of war, moved south into areas populated by communities already over-stretched on account of successive years of drought.
Finnish missionary Rautanen, described the famine as the worst that he had experienced in 45 years of service in Owamboland: 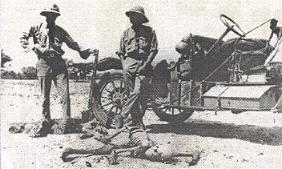 "The present famine is simply indescribable - as far back as August and still earlier one  saw living skeletons from other tribes wandering down to Ondonga. A great number of such men, women and children died in the forests, being unable to reach Ondonga. Those who still had some strength left robbed the weaker of what little they had and left them lying to die of hunger and thirst. Mothers  with their sucking babes were found lying dead together; in some cases the mothers threw their living babies into the bush, being unable to carry them further. In other cases children a little older after their parents had died on the road wandered on alone to Ondonga. Of these children of misfortune I adopted more than 30 but in spite of attention several have died. Thousands of such unfortunates have come to Ondonga and distributed themselves more over the whole tribe. The first refuges were naturally the mission stations and hundreds of people beleaguered our houses begging for food ... Thousands of people have died so that it has become a problem how to get them buried, the more so as the people are too weak to dig graves in the hard ground. Desperate for food, and driven away from those homesteads that still had food, thousands of people walked southwards in search of food."

In early November 1915 it was reported that the road between Otjikoto and Namutoni was lined with dead bodies. Whilst in Tsumeb Owambo famine victims, desperate for food and shelter, roamed the settlement. Many developed dysentery and a number actually died in the streets of the town. A visiting magistrate reported that there was no shelter for them in any shape or form and at night they slept on the hill sides.
The new South African Colonial administration, which had taken over from the defeated Germans in August 1915, was anxious to get the colonial economy going again, and desperate for labour. To them the famine in Owamboland seemed likely to result in positive consequences. As one colonial official, commenting on the famine noted that it would "assuredly result in large numbers leaving the country in search of employment".
Thousands of famine migrants, the majority of them young men, were put onto trains in Tsumeb and transported southwards via Omaruru and Onguati to Karibib. By late 1915 more than 4 000 Owambo famine migrants had arrived in Karibib, many of them in a dreadful condition. Having been without good food for a number of months these people were extremely susceptible to gastric diseases. An estimated 650 migrants lay sick and dying in a series of huts, stables, and sheds that served as hospitals in Karibib.
An official reported on one shed in which the hospitalized Owambo attempted to survive:

"I visited the sick and was horrified to find some 250 to 300 patients suffering from various diseases  no doubt due to starvation and the long journey to the south. They were accommodated in a wood and iron building with an earthen floor (approximately 40 by 20 feet) and barely large enough to accommodate 75 patients. There appeared to be little or no system in dealing with the sick natives. They were sitting and lying about the floor, but a few of the worst cases were on beds irregularly placed in a corner of the building. The stench as I entered was appalling. This arose from a number of large uncovered buckets arranged down the centre of the room. I would explain that the greater percentage of illnesses in the depot are diarrhoeal."

Anxious to ensure the survival as well as to establish some form of control over the thousands of migrants, whom  they had transported to Karibib, the authorities ordered the establishment of a camp beyond the immediate environs of the town. In early 1916 the fountains on the farm Haelbichsbrunn became the site of a large camp in which approximately 3 000 people came to be housed.
A large thorn bush enclosure of approximately 350 metres square was established, initially without any buildings within it. Outside the enclosure an old rail road coach was converted into a storeroom. A building removed from what had presumably been the German wireless station was erected as the compound manager's quarters. Two wood and iron shacks were repaired and erected as a kitchen and an extra storeroom. A windmill, ensured a constant and steady supply of fresh water. In addition to the windmill there was a well next to which gardens, were established.
Though the camp was established at some distance from Karibib itself, it lay no more than two kilometres away from the railway line that led to Windhoek. The Department of Railways was ordered to construct a siding, where supplies could be off-loaded at the nearest possible point to the camp, and to provide a sufficient number of lengths of light rail to permit a line  being laid down from the camp to the siding. In the event the trolley line linking the camp to the siding came to be constructed by Owambo migrants already in Karibib.
Though the infirm continued to be housed in the various sheds and shacks that served as hospital buildings in Karibib, the other migrants were transferred to the camp upon its completion. Initially the inmates of the camp lived within the thorn bush enclosure without any form of shelter.
No mention is made in the archives of the manner in which the inmates dealt with the thunderstorms so characteristic of the Namibian rainy season. The camp remained in existence for at least two years. As conditions improved in Owamboland, so labour shortages developed in southern and central Namibia, and the camp became a depot where migrants on their way to and Owamboland were temporarily stationed before being transferred onwards.

On the 31st January members of the Unam History Department travelled to Karibib, where they were able to visit the farm Haelbichbrunn. Though they did not find any substantial structures, they did find a series of grave - mounds, railway sleepers, the well and reservoir, numerous tin cans, and on aerial photographs the trace of the small trolley line, now long gone.

Karibib   Museums and libraries in Windhoek