On this exact date eighty four years ago (16 February 1907), Cornelius Fredericks died in a prison camp on a rocky, wind-swept outcrop off the coast of Luderitz known locally as ''Haifisch'' (Shark) Island.
Cornelius Fredericks is still remembered and revered as one of the most prominent guerrilla leaders of the 1904 - 1908 war. But the camp where he was held in captivity, and where so many of his contemporaries shed their blood, is now largely forgotten.
Forming part of Luderitz harbour and laying host to the Luderitz campsite, Shark Island carries few clues to its murky past. Between 1905 and 1907 the island was used by the German military as a prisoner-of-war camp. Only a few years earlier, in the Anglo-Boer War in South Africa, the British had introduced what was referred to as ''concentration camps''.
The cruel concept was adopted by the German military, who interned prisoners-of-war in concentration camps in Swakopmund, Windhoek, Okahandja and Luderitz. With soaring high death rates, the concentration camps in South Africa were brutal and merciless and today are commemorated by memorials to those who died.
Shark Island was little different than its South African predecessors, and yet it is as if the history of the Shark Island concentration camp has been erased from the Namibian memory.

The Shark Island camp contained the captured survivors of the guerrilla units that had been led by Cornelius Fredericks and Hendrik Witbooi (after Witbooi`s death in 1905, Samuel Isaak took over the command of Witbooi's people). When these 1 795 prisoners arrived in Luderitz on 9 September  1906 they found several hundred Herero prisoners already there. 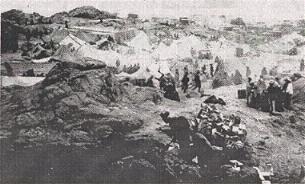 The Herero prisoners had been brought down from Windhoek and Okahandja earlier in the year, as labourers for the construction of the railway line to Aus. There were therefore more than two thousand prisoners in the camp towards the end of 1906.
The six months that followed the initial arrival of the people of Samuel Isaak and Cornelius Fredericks could only be described as horrific. In the annual report for Luderitz in 1906, an unknown clerk remarks that the ''Angel of Death'' had come  to Shark Island.
Huddled together in tents on the far end of a cold and barren island, suffering from malnutrition, the prisoners soon began to die. According to a report by the local German commander, von Estorff, 1 032 of the Nama prisoners alone had died by April 1907. Of those that were still alive it was reported that another 123 were in such poor health that they were likely to die soon. Samuel Isaak, who was one of few survivors, was described as too weak to walk. Such statistics suggest that as many as 80 % of the prisoners sent to this concentration camp, were never to leave the island again.

The following  statement was made by Edward Fredericks, the son of Joseph Fredericks (who had signed an agreement with Adolf Luderitz) in 1917.
In 1906 the Germans took me a prisoner after we had made peace, and sent me with about a thousand other Hottentots to Aus, thence to Luderitzbucht, and finally to Shark Island. We were placed on the island, men, women, and children. We were beaten daily by the Germans, who used sjamboks. They were most cruel to us. We lived in tents on the island; food, blankets, and lashes were given to us in plenty, and the young girls were violated at night by the guards. Six months later we went by boat to Swakopmund, and thence by train to Karibib. Lots of my people died on Shark Island. I put in a list  of those who died. (Note. This list comprises 168 males, including the chief, Cornelius Fredericks, 97 females, 66 children, and also 18 Bushman women and children) ... but it is not complete. I gave up compiling it, as I was afraid we were all going to die. We remained at Karibib for a six months, and were returned to Shark Island for a further six months, when we were again removed by sea to Karibib and thence to Okawayo, where we remained till 1915, when the British sent us back by train to Bethany.
Unfortunately a copy of the list of names compiled by Edward Fredericks has not yet been located.

The forced labour that built Luderitz

Ongoing research by the History Department at the University of Namibia shows the extent to which the early development of the town of Luderitz can be linked to the prison camp on Shark Island. Despite the fact that German business interests in the coastal port dated back to the negotiations carried out by Vogelsang in 1883, the town only really expanded during the 1904 - 1908 war. One visitor reported that, as late as November 1904, the ''town'' consisted of just five buildings. As the port became an important supply centre for German military operations in southern Namibia it grew rapidly.
The forced labour of the prisoners on Shark Island was used to build the growing harbour town. Prisoners worked on the construction of the railway line from Luderitz to Aus and then to Keetmanshoop. A new harbour, started by prison labour, was built on the eastern side of Shark Island. However, the Annual Report from 1907 remarked the use of prison labour had to be abandoned in April as there were only twenty-three people left in the camp who were still fit enough to work.
Fred Cornell, a hopeful British diamond prospector, found himself in Luderitz shortly after the closure of the camp and spoke to local residents. He wrote: "Cold - for the nights are often bitterly cold there - hunger, thirst, exposure, disease, and madness claimed scores of victims every day, and cart loads of their bodies were every day carted over to the back beach, buried in a few inches of sand at low tide, and as the tide came in the bodies went out, food for the sharks." Cornell's comments add a sinister new twist to the name of Shark Island. The token funeral of the Shark Island dead was but one way that the people of Luderitz disposed of the dead. In Europe bodies and body parts of people were in demand as the racial ''sciences'' sought to prove their Eurocentric theories. In 1912 a study on the ''racial anatomy of 17 Hottentot heads'' was published in a German morphology and anthropology journal.
These heads were all taken from the bodies of Shark Island prisoners ranging from a baby of two years old to a forty five year old women. Beyond the morbid nature of the study it added further insult by comparing the decapitated heads with those of apes.
It is difficult to say whether any graves from the Shark Island camp still exist in or around Luderitz. In Swakopmund, although apparently not officially acknowledged by the Swakopmund municipality, a huge area of unmarked graves bears silent testimony to the many Herero prisoners-of-war who died in the local camp. One can speculate that the Swakopmund graves still exist because of their close proximity to the more official (former all-white) Swakopmund cemetery. In Luderitz the town's first cemetery was removed, erasing all traces of a prisoner-of-war cemetery - if indeed it ever existed. Notably, the graves of German soldiers who died locally during the 1904 - 1908 war were also relocated. Ironically a memorial listing their names now stands at the point where the Shark Island concentration camp once lay.
As the centenary of the 1904-1908 war approaches, it seems that now would be a good time for Namibians to reflect on a national heritage - in the form of monuments and memorials - that still celebrates the colonial conquest of Namibia by German forces and forgets the sacrifices of those that led the anti-colonial resistance.
The Boer War camps have their memorial, the concentration camps of the Holocaust have theirs; where are the commemorations of the Namibians who succumbed to man's most terrifying invention, the concentration camp?

Copyright © 1998-2022 namibweb.com - The online guide to Namibia
All rights reserved | JOIN | VIDEO PORTFOLIO | VIDEO/PHOTO COLLECTION
Telegram | YouTube | Blog
Page is sponsored by ETS & Exploring Namibia TV
Disclaimer: no matter how often this page is updated and its accuracy is checked www.namibweb.com and ETS
will not be held responsible for any change in opinion, information, facilities, services, conditions, etc. offered by
establishment/operator/service/information provider or any third party