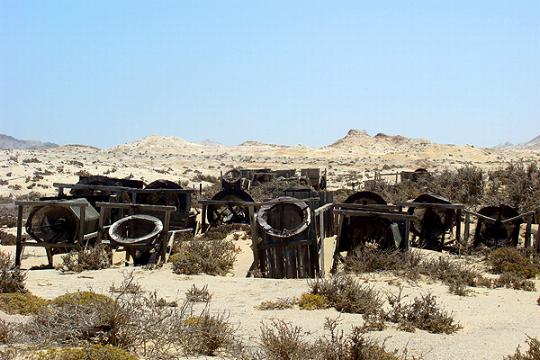 Background:
The discovery of diamonds in 1908 around Kolmanskop resulted in an uncontrollable diamond rush forcing the Government to establish the “Sperrgebiet” between 26-degree (Gibraltar) and the southern border stretching 100-kilometer inland. Prospectors were forced to turn northwards beyond the Sperrgebiet. This resulted in the discovery of diamonds at Spencer Bay in December 1908 and between Meob and the Conception Bay area (Diamond area no 2). This resulted in a total of 5000 diamond claims being registered in 1909 and hopeful prospectors tried their luck at Saddle Hill and Spencer Bay and via Swakopmund and Sandwich Harbour southwards towards Meob Bay. However, the small yields of diamonds from these claims resulted in only a few prospectors in the long term being successful.
Transporting of supplies and mine equipment was effected mainly from Swakopmund by ship and the cutter Viking via Sandwich Harbour, Conception Bay and Meob Bay. Various shipping casualties occurred, such as when the Eduard Bohlen intend to off-load mining equipment, was consequently lost at Conception Bay (1909).
In the area between Conception Bay and Meob Bay the mining settlements of Holsatia, Charlottenfelder and Grillenberger was established and no form of engine-driven transport was available during the first 15 years. One sample of an ox wagon fitted with special wide iron bands to make transportation in sandy areas is visible north off Grillenberger. This wagon and surfboats at Meob Bay 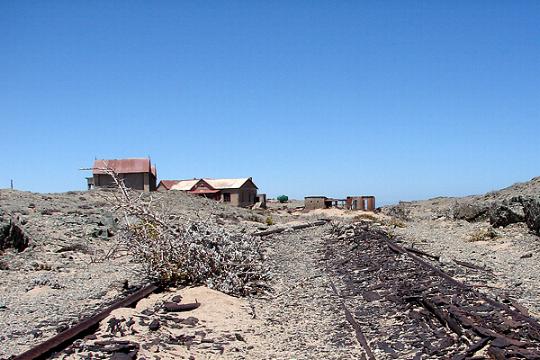 are examples of pre-World War I historical relicts depicting the immense difficult pioneering days in those inhospitable desert conditions.
During 1912/1913 a light railway from Conception Bay to Conception Water and an 80-kilometer pipeline linking the settlements were constructed. It is not totally clear as how many pre-fabricated buildings were erected at the various settlements and only the foundations of some of these are today still visible.
In November 1914 all persons in this area were requested to stop operations and to proceed to Swakopmund up country. This order came as a result of an expected invasion of allied troops. During 1920 activities recommenced in this area and only four companies operated in this area until De Beers purchased one after the other concession area in 1929. From old mining records it is clear that the average diamond found in this area was much smaller to those found south of Luderitzbucht. Operators made use of hand-operated movable sieve jigs, of which some are still visible today at the old mining settlements and were largely dependent on an Ovambo labour force. Namaqua Diamonds for instance employed between 500 and 600 Ovambo’s under contract. They were distributed in gangs of 50 over the extend of the mining area.
In 1932 the price of diamonds dropped considerable and almost all known diamondiferous ground has been worked over at least once. The small diamonds left in the tailings of earlier workers made productions uneconomic.
After World War II a company I 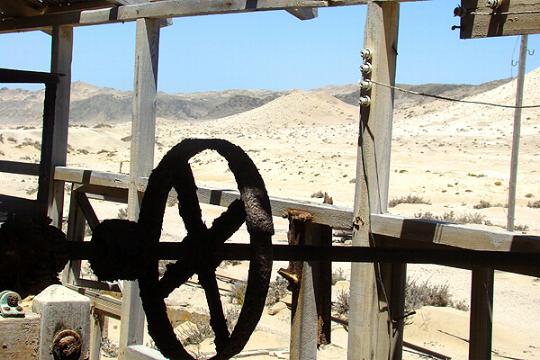 ndustrial Diamonds of South Africa (1945) Ltd. conducted extensive prospecting in the Meob area in which no diamonds were recovered and CDM also abandoned Meob Bay in the early 60’s.
Today only some remnants of the activities are visible and are deteriorating at an alarming rate. There are a limited quantity of hand-operated mining equipment left, two surf boats at Meob and ox-wagon north of Grillenberger giving some in-sight into the hardships endured by Indigenous Namibians and Early settlers to Namibia.
Saddle Hill became well known in Namibian diamond operations through the efforts of the remarkable Mose Kahan. The unsinkable Mose was born in Konigsberg, Prussia and after emigrating to South Africa where he became involved in prospecting and mining. His application for a concession in Diamond area no 2 were successful and he named his claims Saddle Hill Ophir and Atlantis.
To reach his claims with food and mining supplies, Kahan had to make his way through shifting dunes with transport available in those years, which was indeed a hazardous undertaking. After World War II Kahan bought some Ford “stopneus” lorries from surplus war stock, fitting them with Dakota DC3 aircraft tyres. With these low-pressure aircraft tyres he was able to bring supplies and equipment to Saddle Hill. However one of these lorries, nick named Suzie, had unfortunately to be abandoned in the dunes, today still awaiting the return of a repair crew.

Likewise a Bulldozer, pulling trailers with supplies and equipment close to the Uri Haugab Mountains.

The Adventure starts at Luderitz were the group assembles at 18h00 the evening before at the Luderitz Yacht Club or Hotel Zum Sperrgebiet for dinner and briefing before venturing into the dessert the next day. (Participants have to organise their own accommodation at Luderitz)

After backtracking for about 30km on the Luderitz to Aus main road it is time to say goodbye to tar roads, starting an adventure of a lifetime. On day one we pass the ‘stompneus’ Ford and camp close to Suzy.

On the second day the trail leads north past Suzy, and the Bulldozer before crossing into the dune belt on way to Sylvia Hill. For the next couple of days participants will experience ‘camping under the desert sky’ in true expedition style.

Day 3:
Dunes are getting progressively higher and driver experience and skills acquired during the previous 2 days will be tested and honed to perfection. Camping on the beach.

Day 4:
The dune belt opens up at Meob bay and it is in this stretch between Meob Bay and Conception Bay that where active diamond mining was in the order of the day during the early 1900’s. The Settlements of Holsatia, Charlottenfelder and Grillenberger are visited on the way.

From Holsatia the trail leads to Conception Bay and along the beach northwards towards Sandwich Bay. On route the wrecks of the Eduard Bohlen & Shawnee are visited. Passing ‘Langewand’ where massive dunes end in the sea, given a very limited time span to negotiate this stretch of beach. After Langewand the trail once again leads into the dunes, circumnavigating the Salt Pans ‘extensions’ of Sandwich Harbour. The dunes are still getting progressively larger to offer an ever changing new experience of ultimate dune driving. The night is spend approximately 1.5km from the sea close to Sandwich Bay at URI Adventures’ ‘Sandwich camp’.

From Sandwich the trails enters the ‘Roller Coaster’, a series of massive ‘roaring’ slip faces, not only giving the participants a new thrilling experience but also offering breathtaking views of Sandwich Harbour and a panorama of Sandscapes exiting onto the beach south of Walvis Bay. The trail ends at Walvis Bay after a final 50km stretch of beach driving.

The following items is mandatory for each participation vehicle:

• Spade
• Space for one stacker box with food that you will receive the day of departure.
• 60 liters water ( of which 20 liters for kitchen use)
• Tyre pressure gauge
• Toilet paper & matches
• Plastic bags to carry waste (e.g. empty cool drink tins, etc)
• Brake fluid
• Gear oil
• Engine oil
• Fuses
• Spare V- Belt set
• Sufficient Petrol/Diesel to cover the distance – (see route map & distances attached). Heavy sand driving conditions (+/- 3 km/liter and +/- 5 km/liter consumption for larger petrol and diesel engines respectively) will be experienced.
• Vehicle to be fitted with points to attach tow ropes both in front and at the rear. NB!!
• Empty/Available lighter plug socket– to be used with Communication radio
• All equipment and luggage must be strapped in and securely fastened
• Vehicle must be loaded in such a way to ensure that the vehicle is not “Top Heavy” – e.g. only light items, camping gear on roof carriers
• 2 Large bags of firewood per vehicle and only 4 bags of charcoal in the group.
• The trail passes through heavy dune area, which requires high flotation tyres ("fat takkies").

The prices include VAT and the levy per person payable to the Government & Local communities.

Rates per person per trip, inclusive of Government & local communities levy: on request
Adults: 6 days
(Prices are subject to change without prior notice).
BOOKINGS IN ADVANCE ARE ESSENTIAL!
*Information provided by operator