Situated about 30 kilometres north-west of Oshakati, the village of Ondeshifiilwa hosts one of the many sites that conjures up poignant memories of Namibia's long walk to freedom and self-determination.
The sad story of Ondeshifiilwa is, to this day, told with much pain. On April 2, 1989, a fierce clash took place in the village between soldiers of the People's Liberation Army of Namibia and the South African Defence Force. The battle took place at a time when the forces of both sides were expected to be confined to bases in compliance with negotiations linked to the implementation of Resolution 435 of the United Nations. 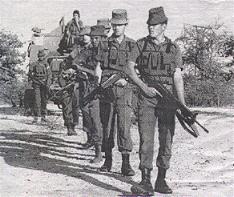 Debate continues up to this day about the substance of the agreement. Swapo argued that the terms of the agreement called for their troops to assemble at bases inside Namibia that would be monitored by UN forces. A similar arrangement had been used in Zimbabwe where guerrillas had assembled at bases inside the country that were run by  British troops, rather than local security forces. South Africa argued that the agreement has stated that Plan forces were meant to withdraw from the frontier zone to bases in the interior of Angola and that Swapo were well aware that there were no Untag bases in northern Namibia.
Meme Fransina Ndilimeke Shiweda, whose house was gutted (with the exception of just one room) by a fire started during the battle at Ondeshifiilwa gave the following account of the events that took place there on April 2, 1989. "Plan combatants presumably (some of whom had been operating in the area a few weeks back) had arrived in Ondeshifiilwa two days before the fight took place. As usual meetings between villagers and Plan commissars took place.
Plan combatants had informed them (the villagers) that their presence in the village in unusually large numbers... was peaceful and did not mean plans to attack the enemy, because, the ceasefire ending hostilities between Swapo and the South African government had been signed and they (Plan combatants) were in the country not to fight, but to receive the United Nations Transitional Assistance Group (Untag) personnel who would decide where to locate them to bases inside Namibia".

According to other eye witnesses, the armed clash began when Koevoet spotted a detachment of Plan combatants in the area. Units of Koevoet are said to have tracked the Plan fighters following a fierce fight the previous day. One of the places where fighting had taken place the previous day was Okahenge where thirty bodies were counted by community members who had been taken to the scene by Koevoet soldiers in an attempt to intimidate them.
Mrs. Shiweda explained that people were shocked when the fighting broke out at Ondeshifiilwa. People in the village had been excited at the news that exiled Namibians were returning home and UN Resolution 435 was finally to be implemented. It was a Sunday morning and so most people were away from their homes attending the Sunday service.
Meme Shiweda returned to her house the day after the battle had subsided to find that her home had been reduced to ashes. As she walked towards the burnt remains of her home she discovered the bodies of dead soldiers heaped in a pile beneath an Omukuku tree about 50 metres from her homestead. The bodies were later buried and a monument was erected at the site after Independence.

Mrs. Shiweda says that she found the courage to move closer to the bodies in an attempt to recognize some of the dead, however the faces of  the dead had been burnt (intentionally?) by flames and were mostly unidentifiable. However she did recognize two of the Plan fighters who had been operating in the area for a number of years. She knew them by their combat names as ''Ndawedapo'' and ''Sheehama''.
Eyewitnesses stated that Koevoet soldiers brought the bodies of five soldiers who had been killed in the battle at Okahenge (about 10 km north-east of Ondeshifiilwa) to be buried with those at Ondeshifiilwa. This brought the number of bodies to twenty-one.
These bodies were wrapped up in army tents and dragged along the ground behind Caspirs to the burial site. The community were shocked and pained by the fact that whilst the South Africans immediately flew out their dead and wounded by helicopter to the mortuary or the hospital the bodies of the Plan fighters who died at Ondeshifiilwa were left lying on the ground, unburied, for four days.
The community was scared to bury the bodies of the dead because of the continuing presence of South African security forces. However, following day prominent members of the village held a meeting and decided that they should bury their sons, whatever the consequences might be. Because of the decomposed state of the bodies it was decided to bury the twenty-one men in a single mass grave at the site where they lay and this was done on Wednesday, April 5.
The villagers explained that one other Plan fighter had been badly wounded during the battle and had hidden in the bush with a terrible stomach wound. He was a young man, less than twenty years of age, and staggered into one of the homes the night after the battle. He needed hospital treatment, but because of the South African patrols it was impossible to move freely at night and, by the morning, he had passed away. The community buried him in the field next to the home where he died. However, before he died he had bravely told the community the names of his parents and the village where he had grown up. The family were therefore informed of his death and able to visit his grave.

Two weeks after the burial the bodies in the mass grave were exhumed in the presence of the United Nations and journalists. Whilst the aim of the exhumation was to investigate the cause of death of the soldiers the community noted that, once again, the bodies were left lying on the ground and had to be reburied again by the local community - a task that left many people feeling sick and unable to eat. A military history of the liberation struggle in Namibia has yet to be written and few contemporary written documents from the struggle are available to historians.
The SADF allegedly shredded a lot of their material before withdrawing from Namibia and Swapo's own archives have not been deposited in the National Archives of Namibia. However, the story of Ondeshifiilwa shows the extent to which the history of the war can be reconstructed from the memories of individuals and communities about their own harsh experiences. Indeed each of us can contribute to the future writing of the history of the liberation struggle by recording or writing down our own personal experiences and depositing them in the National Archives of Namibia.

Museums and libraries in Windhoek