Palapye is a large town in Botswana, situated about halfway between Francistown and Gaborone (240 km away from Gabarone and 170 km away from Francistown). Over the years its position has made it a convenient stopover on one of Southern Africa's principal north–south rail and road routes. Located here is the Morupule Colliery coal mine, which supplies Morupule Power Station, Botswana's principal domestic source of electricity. The power station has undertaken an expansion project to increase its generation capacity in an effort to meet the country's increasing demand for electricity. Construction began in 2010. Currently, the plant produces 120 MW of electricity. 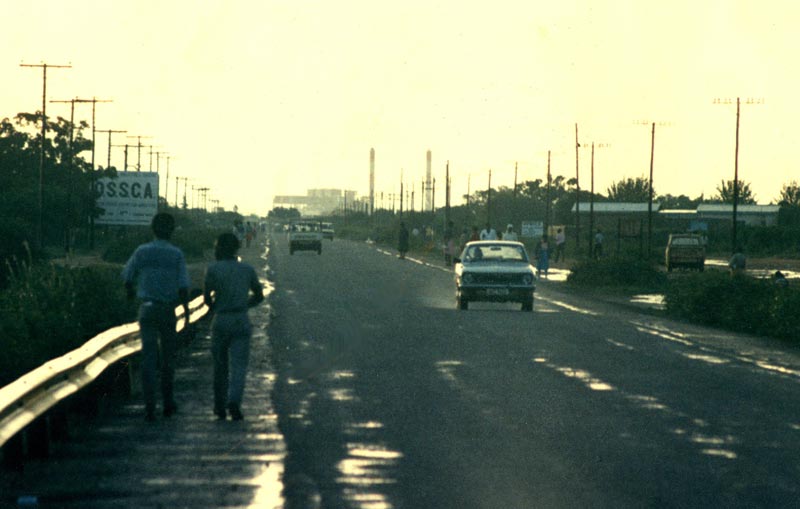 The Bamangwato people, under Khama III, are widely believed to be the first people to have settled down near present-day Palapye. There, the settlement Phalatswe, also called Old Palapye, was the capital of these people in the early part of the 20th century. The ruins of Phalatswe still stand today, a few kilometres away from the town centre.

Palapye is situated nearly 70 km north of the Tropic of Capricorn. It is located towards the central-eastern edge of Botswana.

Summer months are from mid-September to mid-April. Summers are very hot in Palapye, with daytime temperatures reaching up to 40°C. Thunderstorms are plentiful in the summer. Rainfall levels reach usually a minimum of 300 mm annually. Winters in Palapye are mild and dry.

Palapye's population is believed to be bordering the 30,000 mark, however, this is not an official figure, with many quarters arguing that the actual number is much higher/lower. Christianity is the main religious belief amongst Palapye citizens. However, there is an ever-expanding population of Muslim and Hindu believers in the town.

The Palapye Water Affairs currently provides the town with an abundant supply of water. The works is located a few kilometres outside the town. The Affairs provides Serowe with water, through a new pipe network since 2008.

Due to current black-outs across the country, resulting from South Africa's refusal to supply electricity to Botswana, construction has been halted for many projects. However, they have resumed, the most important project being the expansion of the Morupule Power Station. The Morupule Expansion Project 1, with an estimated budget of P1.5 billion, is expected to produce 3.8 million tons of coal.

Plans for a new hospital, similar to the newly constructed Serowe Hospital, have also been proposed. A new police station is also to be built, with land clearing having already been completed. It will be located outside the town, on the A1 Highway and is due for completion in late 2011.

From being a mere stop-over, Palapye is rapidly developing to one of Botswana's main financial, residential and educational hubs. The town's physical size has more than doubled since the 1990s.

Palapye also has a professional recording studio, called Ruff Riddims, built in early 2009. It is the first of its kind in Palapye.

The main sport played in Palapye is soccer, with many people also playing softball. Sports are usually played at school grounds, which have adequate facilities and fields. Palapye has currently four known soccer teams, FC Palapye, Palapye United and Palapye Swallows and Motlakase Power Dynamos. However, due to there being no stadium in the town, all four teams usually play their matches elsewhere, although occasionally some games are played in schools, on their sports fields. FC Palapye play their matches at either Letlhakane, Orapa, Francistown, Sua, Maun or Selibe Phikwe. Both teams are not well known teams, gathering only a very small handful of supporters.

Palapye is the home of several private schools catering for the demand for independent education. This includes the fast-growing, popular Kgaswe School, which caters to over 500 students. It was only a pre-school and a primary school until 2006, when, under public demand and influence, the Kgaswe Board of Directors decided to open up a high school section as well. Kgaswe began Form 1 (equivalent to grade 8) in January 2006. One higher class was added after every year until Form 4 (Grade 11) in 2009. These four grades offered the Cambridge IGCSE and O-levels syllabus. The secondary school is officially registered with the Cambridge International Examinations. In 2010, Kgaswe introduced Cambridge A-levels.

Since the turn of 2000, rumours broke of a university being built in Palapye, but nothing came of age. However, after numerous delays and extensive research, a project was finally accepted during 2004. BIUST (Botswana International University of Science and Technology) has begun construction of its campus in December 2009. Currently, the construction of the first phase of the university will cost close to P450 million. It is expected to be completed by July 2011, with the first students due for enrolling in August 2011. The university's construction will help ease the burden on the University of Botswana, in the country's capital, Gaborone, which in recent times has been known to turn away many prospective students. The Gaborone campus is the only university in the country, and it has been struggling to meet the demand for an increased number of students. The university in Palapye will help address the situation. The university is located near the Palapye Water Affairs site.

There is also a proposed plan by the University of Botswana to expand its Faculty of Medicine and locate it in Palapye.

Palapye lies on the main A1 Highway, which connects Botswana's two major cities, Gaborone and Francistown. There is a secondary road that leads to Serowe, and later, Orapa and Lethlakane. In 2008, proposals were made to build a new Trans-Kalahari Railway to a port in Namibia.

The national railway, which connects all major towns and cities all over Botswana to each other, also passes through Palapye. The rail track through Palapye links the town to Gaborone and Francistown. Coal that is mined from other regions in Botswana, such as Selebi-Phikwe, is sent by rail to Palapye. A proposed rail link to Bulawayo, Zimbabwe has been touted to operate, but such plans are still to be considered by the government, due to the possibility of illegal immigrants gaining access into the country.

There is a small airfield located just outside the town.

An International Airport, that will be located on the Palapye-Serowe road, is another development that is being considered. If plans do go ahead for the proposed Palapye International Airport, it will be the country's second international airport, after Sir Seretse Khama International Airport in Gaborone, easing the increased traffic that is currently being experienced at the present airport. However, such plans have been put on halt due to the current renovations and expansion at Gaborone Airport and a newly constructed Francistown Airport.

There are several well known tourist attractions close to Palapye. The Khama Rhino Sanctuary, located some 15 km outside of neighbouring Serowe, is probably the best known and is some 50 km from Palapye. Here, there is plentiful opportunities for game-viewing, especially for the endangered black and white rhino.

The Tswapong Hills also have many areas of historical significance and well as the Moremi Gorge. This is an area of great beauty as it has a permanent water source.

Some 20 km ESE of Palapye, close to the village of Malaka, are the remains of Phalatswe, also called Old Palapye, the capital of the Bamangwato people under Khama III from 1889 to 1902.

Copyright © 1998-2022 namibweb.com - The online guide to Botswana
All rights reserved | JOIN | VIDEO PORTFOLIO | VIDEO/PHOTO COLLECTION
Page is sponsored by ETS & Exploring Namibia TV
Disclaimer: no matter how often this page is updated and its accuracy is checked www.namibweb.com and ETS
will not be held responsible for any change in opinion, information, facilities, services, conditions, etc. offered by
establishment/operator/service/information provider or any third party