Information about seal colony at Cape Cross and photo album.

The main attraction for tourists at Cape Cross is the seal colony and an interesting history of this place.
The first European landed on Namibian soil was
Portuguese explorer Diego Cao (1486) who erected the first stone cross in honour of King Johannes of Portugal. It was the tradition of the Portuguese to build a cross where ever they landed. These crosses had various functions: symbol of Christianity, documentation of the rights of possession and landmark for passing ships.

When German South West Africa was established in 1884, they immediately wanted to find a better harbour than Swakopmund. They gave the task to German 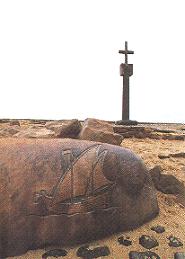 captain named Becker and with his ship ''Falke'' he found Cape Cross. He did not stop there however, he wanted to pick up Kurt van Francois in Swakopmund first. He was in Windhoek though, so his assessor Köhler went with Becker. They found that the possibilities to land there were quite good, but this anchor place had one problem: they did not find any fresh water!
While they were searching for water they found the half broken stone cross, which they took along to Germany and which eventually ended in the Berlin Museum of Transport and Technic. In place of Diego Cao's cross Becker built a 5 m high wooden cross, which was replaced with reformation of the original cross in 1895. Even when Kurt von Francois was on a field march a short while later he did not find any alternative for the lack of fresh water.
Cape Cross did become an economic centre after all, because there were thousands of seals there, which were highly desired for their meat, fur and oil. In 1894 the English man Mattheus found the seals by instructions from the Germans. They hunted the seals and exploited guano. For that the Germans paid them 500 pounds a year for 10 years.

In 1895 about 100 people worked at Cape Cross. There is also a cemetery with 104 graves still today. To get fresh water they condensed salt water. In the first year they exploited 6000 tons of guano and exported 2500 seal furs. The guano exploitation went so well that they built the first railway along the salt plains to the harbour, which was 16 km long. The wagons were pulled by a locomotive and donkeys.
By 1903 guano exploitation was exhausted and the seal colony was so reduced that the economic activities came to an end. Today the surrounding of the cross is totally different.
Seal colony.
The seal colony at Cape Cross is the breeding place of the Cape fur seals, which are actually a species of sea lion. Along the Namibian and South African coast there are 24 colonies with a seal population of about 650 000 animals. At Cape Cross live about 80 000 to 100 000 seals. They are slightly reduced every year because they are still desired and apparently they eat too much fish.
Reproduction. Outside the breeding period one hardly sees any bulls in the colony. They only come in October every year to mark their territory, which they defend for life or death against other bulls. Fully grown bulls can weigh up to 190 kg but at the beginning of the breeding 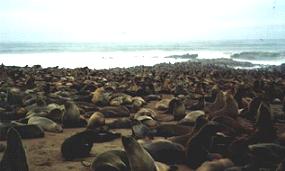 period they weigh up to 360 kg. They loose a lot of their fat in the first 6 weeks by defending their territory.
Cows are a lot smaller than bulls, they only weigh up to 75 kg. A few weeks after the bulls have arrived the pregnant cows come to the colony to have one youngster. The pregnancy lasts for about 8 months. One bull has about 5 to 25 cows in his territory and only 7 days after giving a birth the next rutting season starts.
Most youngsters are born in November/December and they weigh about 4.5 to 7 kg. Their fur is pitch black and they start sucking on their mother immediately. They have a very strong mother-youngster relationship. A few days after giving a birth the mother has to return to the sea to feed. During this time the youngsters are very vulnerable and are hunted by jackals and hyenas. Other reasons for deaths are premature birth, injuries, drowning and starvation. 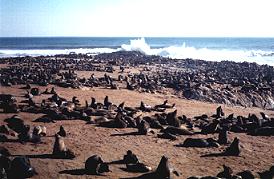 About 27% of the seals born at that time die. The youngster feeds nearly one year on the mother. When they are about 4 to 5 months old they start feeding on fish as well. When they are about 7 months old they can stay in the water for up to 4 days.
Diet. Seals consume a lot of fish, approximately up to 8% of their own body weight daily. They also eat cattle fish and crust fish. Although they feed up to 52% on non-commercial fish the fishing industry think that they are a disadvantage to the industry.
Fur. A seal fur is very soft. They have a thick layer of short soft fur, which is protected by a layer of longer, harder hair. The top layer gets wet, the bottom layer stays dry. The bottom layer, as well as the fat formation under the skin give seals a good isolation against the cold Benguela current. The seal population reached approximately 250 000 in 1993. Year later outbreak of red tide (an algae whose growth triggered by either high levels of toxins or oxygen in the water) caused the shoals of fish to leave the coast. Seal population was reduced drastically to only around 25 000.
One of theories is that red tide appears on 30-year cycle.

Accommodation in the area:

Open daily 10.00 to 17.00, no accommodation, day visitors only. Toilet facilities are available. No pets are allowed.
Reservations
(click for more information)