The Gibeon meteorite shower is the most extensive meteorite shower known on Earth which covers a large elliptical area of some 275 by 100 kilometers centered on Brukkaros south of Mariental. Most fragments fell just southeast of Gibeon. To date, some 120 specimens with a weight of almost 25 tons have been recorded. In addition an unknown number have been collected but never recorded.
Small pieces of metal were collected by James Alexander in 1838 at a place about three days journey northeast of the mission at Bethany. He described the pieces as being up to two feet square, and sent some materials to the chemist John Herschel in London, who established their meteoritic origin. However, it is well known that the local Nama people had been using the meteorites for a long time to produce spear points and other weapons.
The first large piece of some 81 kg was carried by ox-wagon for 800 miles to Cape Town by John Gibbs before 1853. From there it was sent to London, where the mineralogist to Queen Victoria, Professor 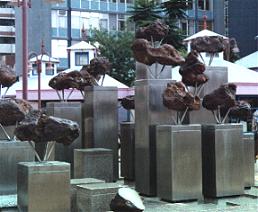 John Tennant, purchased it. He forwarded it via New York to Professor Charles Shepard of Amherst College in Massachusetts, who studied the material in detail. By 1910, at least ten pieces of the Gibeon Meteorites had been shipped to Europe. From 1911 to 1913, the geologist of the German colonial administration, Dr Paul Range, collected all the remaining meteorites he could find and mapped their occurrence. The specimens were displayed in Windhoek, and a number of them were also donated to various museums around the world.
The Gibeon Meteorites occur partially embedded in rocks of the Karoo Sequence and calcretes of the Kalahari group. It has been calculated that a meteorite body, measuring roughly 4 by 4 by 1.5 meters must have entered the Earth's atmosphere along a northwesterly trajectory and at a low angle of 10` to 20` from the horizon. This body fragmented while still high in the atmosphere, so that the fragments themselves suffered thermal alteration by melting of the outer surface.
This either covered the fragments in smooth outer layers, or was pulled off in places by the drag of the atmosphere, leaving an uneven mass with deep, spherical cavities on the outer surface. These well-developed thermal alteration structures prove that the fragments had an extended flight through the atmosphere before being deposited. The varieties of thermal and shock-induced microstructures of the Gibeon Meteorites are the greatest in the world an only matched by the Canyon Diablo Meteorite of northern Arizona.
The Gibeon Meteorites are classified as octahedrites, the most common type of iron meteorite, and consist entirely of taenite and kamacite, two different crystalline varieties of a iron-nickel alloy. Taenite (gamma-Fe with 8-55% Ni) and kamacite (alpha-Fe with 5.5% Ni) form alternating parallel crystal bands that are arranged in a triangular pattern. This pattern is the typical Widmannstatten structure, a characteristic feature of many meteorites. Besides iron, the main constituent, the Gibeon Meteorites contain an average of 8% nickel, 0.5% cobalt, 0.04% phosphorus, small amounts of carbon, sulphur, chromium and copper, and traces of zinc, gallium, germanium and iridium. The Gibeon Meteorite specimens range in size from one ton to just a view grams. A few rare tetrahedral and octahedral crystals have also been recovered, and probably resulted from the successive splitting off of thin kamacite lamellae along with the selective corrosion of intervening taenite layers.
Today, the known Gibeon Meteorites that have remained in Namibia are displayed in the Post Street Mall (picture) and at the museum of the Geological Survey of Namibia in Windhoek. A number of smaller pieces also form part of the reference collection of the Geological Survey of Namibia. While meteorites continue to be found in the area of Gibeon, it is very difficult to observe them in the field without a metal detector. Despite the fact that meteorites are protected by law in Namibia, and may not be removed from their original site, a large number are leaving the country illegally to be sold at international rock and mineral shows. The largest specimen known and weighing about one ton was illegally exported to the USA recently. This, sadly, deprives the local people of an opportunity to develop a sustainable use out of this unique natural resource and national heritage; it also deprives the international scientific community of valuable research material.