Tower is circular cast iron
Tower is painted with black and white horizontal  bands
Lantern is painted red
Height is 35 meters
Colour scheme of the light is white
Light character is 3 (three) flashes (one short, two long blasts) separated by 3.6 sec. every 30 seconds.
On a clear day it is visible from afar, standing guard over the lagoon in Walvis Bay. And while most residents and visitors of 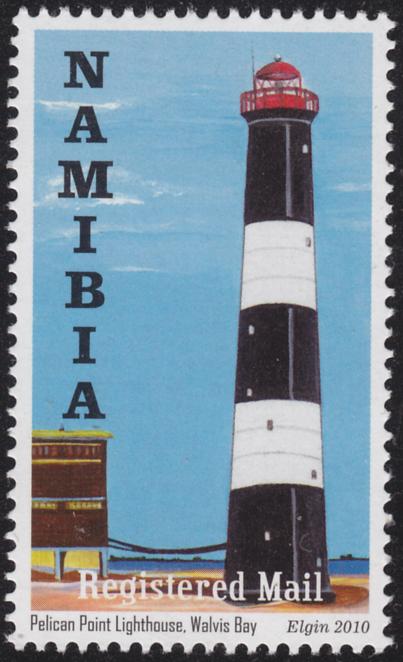 the coastal towns of Walvis Bay, Swakopmund and Henties Bay are aware of its presence, few are familiar with the history of the lighthouse at Pelican Point. 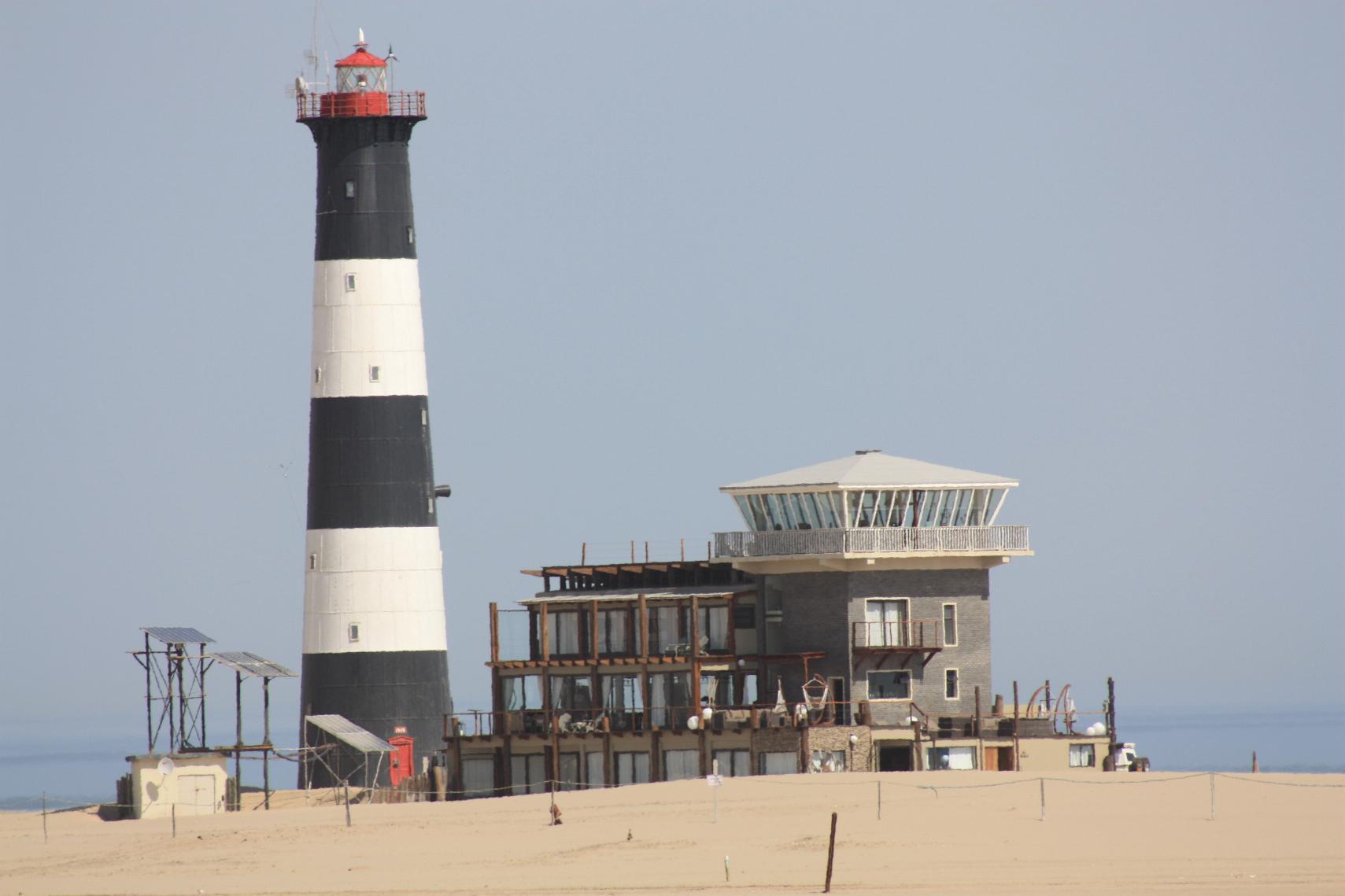 The first thing people notice when approaching the lighthouse by boat on one of the popular cruises offered by operators in the harbour town's lagoon is that the lighthouse is not situated at the edge of Pelican Point as one would expect. This is because the peninsula comprising a narrow strip of sand which extends into the sea in a northerly direction for about nine kilometres and protects the bay from the Atlantic Ocean, has grown considerably since the beacon was erected. As a result of sea currents, wind and periodic floods of the Kuiseb river vast amounts of soil were deposited on Pelican Point over the years, resulting in the sandbank now extending almost two kilometres beyond the current position of the lighthouse.

The second peculiarity of lighthouse tower is its coating. Initially painted in grey, mariners complained that is was not clearly visible in daytime, especially during the hazy and misty conditions that often prevail in the area. As a response to these concerns seafarers were asked to suggest a new colour scheme that would set the tower more clearly apart from the background and make it more conspicuous. After experiments with several colour schemes it was eventually decided to coat the tower in a combination of black and white which proved to stand out the best.

The first beacon on Pelican Point was established in June 1915 and consisted of a small automatic acetylene gas lantern, mounted on a wooden pile driven into the sand. Seventeen years later that installation was replaced with a prefabricated cast-iron tower which was acquired in 1913 as a replacement for a lighthouse in Durban but never used there. The 30,7 meter tall tower served its purpose as a navigational aid well for several years.

As the harbour town of Walvis Bay grew in size and the shipping activity at its port increased however, the existing light source of the beacon was no longer sufficient and in 1955 was replaced by a 500 mm acetylene gas lantern and four years later by a 250 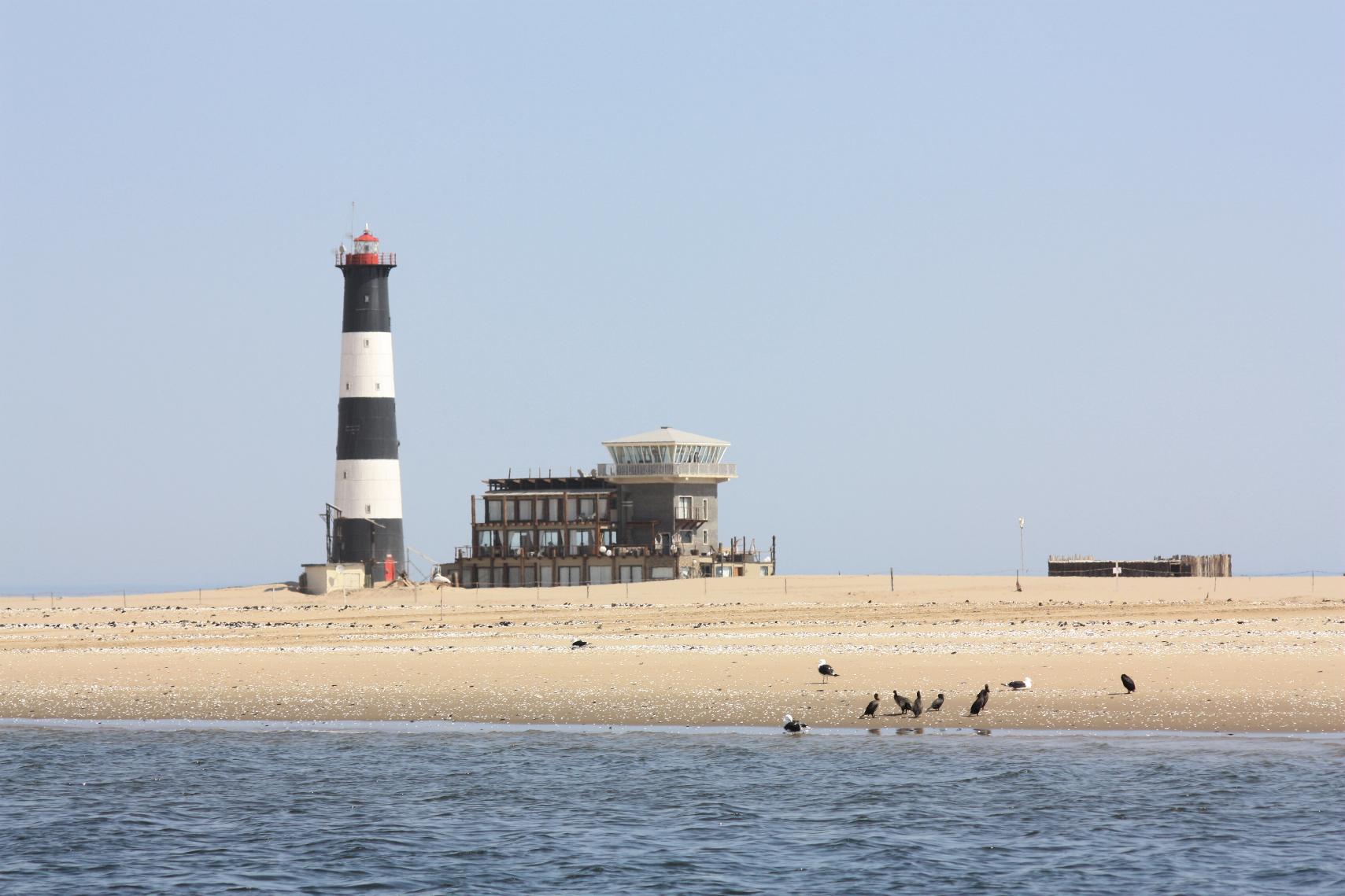 watt lamp increasing the candlepower to about 15.000 cd. Since the harbour continued to expand at a rapid rate, the tower had to be upgraded even further, resulting in the beacon being fitted with an automatic revolving pedestal providing a 1.300.000 cd group flashing light.

In addition the light house was equipped with a modern electric fog signal in 1971 following the installation of a radio beacon a few years earlier. Furthermore an engine room and living quarters for the lighthouse keepers were erected and redesigned several times to avoid the build up of sand dunes against the structure.

While the beacon has lost some of its navigational significance with the introduction of modern positioning systems, it has forfeited none of its appeal as the sentinel holding watch over the lagoon in Walvis Bay. Since a great part of the lagoon and shoreline form part of the Walvis Bay Wetlands protected under the Ramsar Convention as an important bird area, access to Pelican Point and its lighthouse is restricted. This does however not detract from the haunting beauty of the beacon, rising like a ghost from the mist, akin to a mirage in the desert.

Having weathered the harsh climatic conditions it has been exposed to for over 70 years it will most likely continue to brave the elements for a long time to come. And it will not only continue to serve as a navigational aid for mariners, but will remain both a landmark for coastal residents and an attraction for tourists visiting Namibia's central coast.

The Lighthouse was commemorated by the Namibian Post with the release of a stamp on 18 June 2010.