The Namib Desert Horse is a rare horse found in the Namib Desert in southern  Namibia, Africa. It is most likely the only feral herd of horses residing in Africa in harsh desert conditions. Today, approximately 150 horses live in 350 square kilometres stretch of the Namib Desert en route to Atlantic coast town Luderitz. The origin of these animals is unclear, though several theories have been put forward. Genetic tests have been performed, although none to date have completely verified their origin. 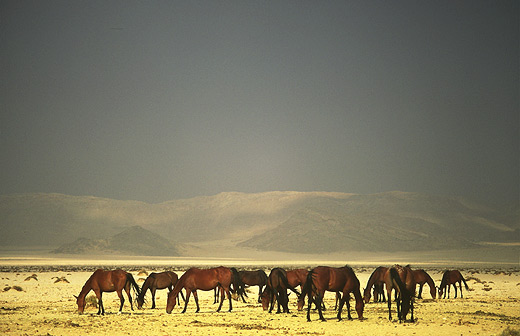 native to Sub-Saharan Africa. The first horses in sub-Saharan Africa were brought by the Dutch to the area of the Cape of Good Hope in the 17th century. There are several theories on how the Namib Desert Horse originated: One theory says that a ship with horses on board was run aground; the strongest horses were able to swim ashore to the mouth of the Orange River and up to the Garub Plains, where the modern herds live today.

There is also a theory that Namib Desert Horses are descendents of the horses of the German Schutztruppe brought in during the 19th century. Others say they are from Farm Duwisib (south of Maltahöhe), owned by Baron Hansheinrich von Wolf. Other sources suggest they came from imports in the 20th century, between 1904 and the beginning of World War I, when the Germans brought 30,000 horses into the area. Others suggest that some of these horses' forebears escaped from the South African cavalry during World War I.

Research in the archives of pre-1914 horse breeding operations found at Windhoek, combined with blood typing studies suggests that the animals descended from a gene pool of high-quality riding animals, as opposed to work horses. A study released in 2005 suggests two likely source of these horses' forebears. The first source was a stud farm near Kubub, owned by Emil Kreplin, once mayor of Lüderitz from 1909 to 1914. In this period, Kreplin bred both work horses and race horses. Photo albums from the stud show animals with distinctive characteristics still seen in the Namib Desert Horse of today. In addition, during World War I, at one point, the South African military was advancing against the Schutztruppe, then located in the Namib near Aus, when the pilot of a German biplane dropped bombs onto the South African camp near Garub. In the process, some ordinance landed among a herd of 1,700 grazing horses. These escaped army animals may have joined stock animals lost from Kreplin's stud farm during the turmoil of the war. Horses in the area would likely have congregated at the few existing watering places in the Aus Mountains and Garub. 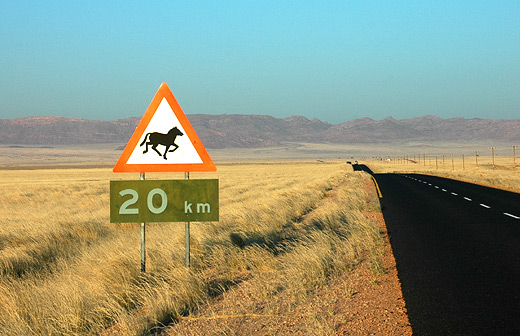 Regardless of origins, after 100 years there were only 200 horses left in the deserts, but those that survived had adapted to the conditions of the South Namib Desert.

The Namib desert horses were originally forced to compete with domesticated livestock turned loose by farmers onto the same ground where the horses grazed. Due in part to this competition for limited forage, the horses nearly became extinct. However, they were saved in part due to the efforts of Jan Coetzer, employee of Consolidated Diamond Mine (CDM or DBCM), mining in a certain part of Sperrgebiet. Coetzer was fond of horses and made sure they always had water at the Garub windmill, put there as a permanent water tank by CDM. Later, the horses' habitat was made part of Namib-Naukluft Park in the late 1980s. The park was headed by Chris Eyre, head of the Nature Conservation.

The Namib Desert Horses are athletic, muscular, clean limbed, and are very strong boned. They are short backed with oblique shoulders and good withers. The horses have the appearance of well bred riding horses in head, skin, and coat.

The Namib desert horse must eat while on the move. When grazing, they only stay in one spot for a short time. They must cover considerable distances, as much as 15 to 20 kilometres (9 to 12 mi) between the few existing water sources and the best grazing sources. Due to scarcity of water, the Namib desert horse sometimes has to go without water for as long as thirty hours in summer and has been known to go close to 72 hours without water during the winter. As a consequence, Namib Desert Horses are considered very hardy. Due to the distances they must travel and the scarcity of water, selection pressure 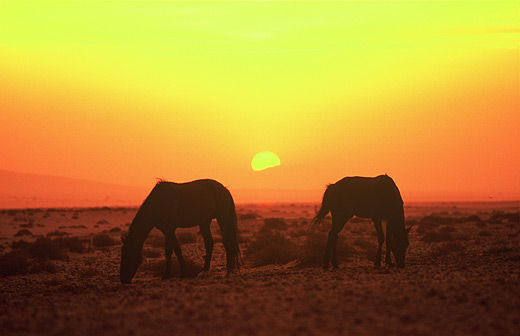 is severe, and weak animals do not survive.

The most common color of the Namib desert horse is bay, although there are a few chestnut horses. There are occasional individuals with dorsal striping but no zebra stripes. No other colors have been recorded.

Genetic testing results published in 2001 indicated that Namib Desert Horses are one of the most isolated horse populations in the world, with the second-lowest genetic variation of all horse populations that have been studied to date. In part, this is due to their small founding population, and generally small modern population, made smaller during periods of drought.

On Cothran's Family Tree of Horse breeds, they fall in the Arabian group, nearest the Shagya Arabian, a horse breed from Hungary that had been imported into colonial German South-West Africa. However, though the horses have a genetic similarity to Arabian-type horses, they do not closely resemble them in outward appearance.

Further, in blood typing studies done in the 1990s, a new variant was noted. Its absence from the blood samples of all other horse breeds indicates the presence of a mutation that probably occurred after the horses became established in the desert.

The Namib desert horse usually live in herds of up to ten animals, consisting of one or, occasionally, two stallions with a few mares and foals. These are the breeding groups. There are also 'bachelor' groups. The breeding groups are led by a mare. The lead mare decides when to go, stop, choose another grazing spot, and when to go to a water source.

There are few natural predators in the area, other than the Hyena, which poses a threat primarily to foals. When a foal is threatened, it is usually the mare that is the mother of the foal who defends her young. The stallion will deal with threats to the entire herd, though in many cases, the stallion primarily keeps bachelor animals away. There are few serious fights, most are for show.