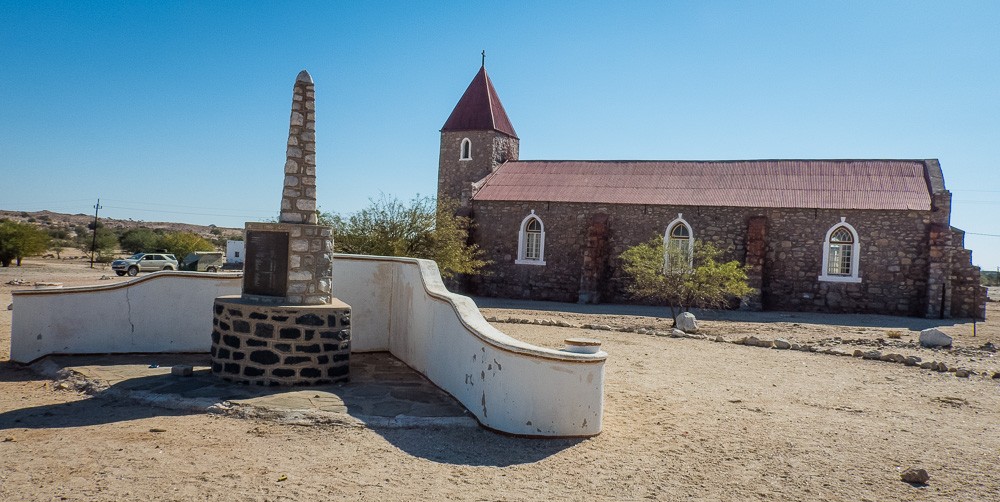 for Warm Bath, Nama: |Aixa-aibes) is a settlement located in the Karas Region of southern Namibia.

It is situated south of Karasburg at the Homs River, close to the border with South Africa, and belongs to the Karasburg electoral constituency.

First occupied by traders, hunters, and missionaries of different congregations, the hot springs from which the settlement's name is derived were first exploited at the beginning of the 20th century and are now being developed into a tourist attraction.

Recently, Uranium was discovered in the area.

Climatically, Warmbad lies between the coastal desert and the Karoo.

There is winter frost and very little rainfall (annual average: 96 millimetres (3.8 in)), the mean medial temperature lies between 12 and 15 degrees.

There is an interesting Warmbad Museum in the village.

The oldest building in Namibia: Warmbad

Warmbad was first named in 1760 by scout Jacobus Coetzee, the first documented European to cross the Oranje River into the South-West African territory that today forms the state of Namibia. At that time it served as stop-over for traders, adventurers and large game hunters from the South African Cape Colony. In 1805 two missionaries from the London Missionary Society, Abraham and Christian Albrecht, initiated the erection of a church and a pastor's house, thereby establishing the first mission station in South-West Africa in 1806. This year is assumed as the foundation of the settlement. 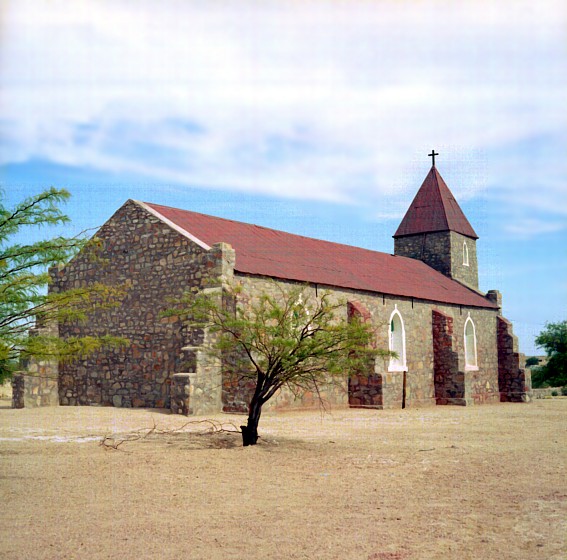 These two buildings were the first European-style buildings on South-West African soil. The local Orlam community under the leadership of Jager Afrikaner soon became angry about the European influence and destroyed both buildings in 1811. Until the rediscovery of ||Khauxa!nas which was built before the advent of the 19th century the oldest structure in Namibia was assumed to be the Schmelenhaus in Bethanie, erected in 1814.

In 1834, Wesleyan missionary Edward Cook entered the area and erected a new missionary building on the foundations of the destroyed buildings. Scientist Sir James Edward Alexander lived in one of its rooms during his stay in 1836. In the 1840s Benjamin Ridsdale was stationed here and embarked on several journeys to nearby Orlam communities. He referred to Warmbad as Nisbett Bath. In 1867 the Rhenish Missionary Society took over operations in Warmbad. A school was built in 1868, and a new church in 1877.

After Imperial Germany declared its territorial rights over South-West Africa, a fort was built in Warmbad in 1905, and Schutztruppe soldiers were stationed at the settlement to counter the Herero and Nama uprising. In 1908 the first swimming pool was built at the |Aixa-aibes hot springs, in 1910 the settlement gained District status. Still, Warmbad lost its original importance as a stop-over during this time, becoming bypassed by railway connections and new road construction. Many of the buildings began to decay.

The majority of Warmbad's inhabitants live in abject poverty. There is no industry in the area, residents survive from old-age pensions and subsistence sheep farming.

Between 2004 and 2006 Warmbad was developed for tourism purposes, with the |Aixa-aibes healing hot spa as the main attraction. The project was supported by the Namibian and the German government and included the renovation of the public bath as well as the reconstruction of some of the historic buildings. While under South African mandate, the hot springs were sold to a private investor for 12,000 Rand. After Namibian independence, government bought the site back for five times that amount. The springs are now community property again.

In 2009, Canadian mining company Xemplar Energy announced the discovery of significant Uranium deposits in the area. Xemplar has since been listed at the Namibian Stock Exchange.